Home/Digital Media Jobs Have a Very Bright Future
Previous Next 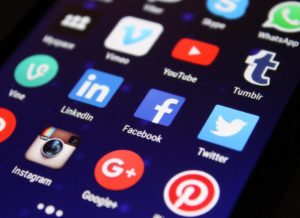 Long before there were mobile phones or tablets, long before there were PC’s or Mac’s, and long before there were any digital media jobs, there was a hand held cone shaped device called the megaphone. You still see them occasionally used by cheerleaders at high school or college football games, but that’s about it. The megaphone is essentially a funnel that channels the voice, making it louder and easier for someone to hear what you’re saying over a wider area. With the advent of modern day electronics, the low-tech megaphone has largely gone the way of the manual typewriter. But it serves as a fitting metaphor to describe how marketers historically have blasted out their messages to consumers. Prior to the digital revolution, companies relied entirely on traditional advertising in the form of catchy jingles, TV commercials, billboards, print ads in newspapers and magazines, hot air balloons, blimps, you name it, to grab your attention and compel you buy their product or service. Mass media such as television, radio, and magazines were the funnels through which marketers shouted out their messages. Like a jet engine sucking in air, marketers hoped that as many of us as possible would get drawn into those funnels, and through a conversion process come out the other end as paying customers. “Build a product, blast the word out and they will come,” was the inveterate battle cry of traditional advertisers.

Then, starting in the 1990s, a funny thing began to happen. Those funnels began to turn the other way around. No longer could marketers depend on dancing chickens, talking hot dogs or slick spokesmen to win over the hearts and minds of consumers. Consumers had a revolutionary new tool called the Internet, which allowed them to blast out their own messages towards the advertisers. The tables, or shall we say the funnels, were turned. This fundamental shift in consumer behavior propelled by incredible advances in digital technology has forever changed how marketers engage and interact with consumers.

Welcome to the digital marketing revolution!

At the forefront of this revolution is the explosive growth of online sales. Amazon, the undisputed leader of online retailing, did more than $74 billion in net sales in 2013, a whopping 18% increase over the year before. That $74 billion may pale in comparison with annual sales of $470+ billion at the nation’s largest retailer, WalMart, but some experts predict that Amazon will totally close that gap within the next 15 years. Amazing when you consider that Amazon has been around less than 20 years and WalMart more than 50. Online video advertising is on fire. Evercore Partners Research Division predicts this segment alone will grow to more than $8 billion by 2016, representing a 37% compound annual growth rate. You’d be hard pressed to think of anything that’s growing consistently at 37%!

Digital marketing, including the areas of ecommerce, mobile, social media and email, has changed the way business gets done, and it’s growing fast. Consider these trends:

This ever-shifting landscape has created an insatiable demand for skilled and talented specialists who can create, execute and optimize digital marketing programs across an exploding number and increasingly complex spectrum of platforms and devices. The sheer number of ways people can now connect with brands, and the technical complexity behind those methods, has created entirely new job categories that didn’t even exist just a few short years ago- digital media jobs . Digital media recruiting is hot: The need for digital marketers has become so intense that the inability of many companies to staff high performance digital marketing teams is costing them business. Because of enduring economic and social forces, we are at the very early stages of a golden era of employment for those who sell and market products and services over the web, and the battle to lure the best talent available is just beginning.

As a digital media recruiting specialist, I can tell you that the types of digital media jobs that are available in the digital space are wide and varied, ranging from the highly technical to the highly strategic and everything in between. Any list of the hottest digital media jobs would include these fast growing specialties, positions I am asked to fill on a regular basis here at Bernhart Associates Executive Search:

For organizations that conduct a large share of their business over the Internet, these have become mission-critical digital media jobs. If one of these positions is vacated, it can’t be left open long without having a major impact on the business.

I’d like to finish with this quote from Jamie Turner, founder of 60secondmarketer.com and co-author of the book, How to Make Money with Social Media and Go Mobile, who sums it up well: